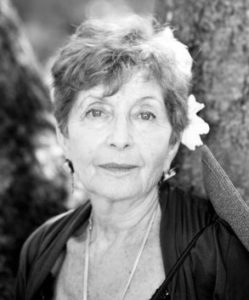 Harriette Joffe is a bit of an enigma.

Her body of work is simultaneously elusive and coherent, formed initially during the 1960s and still evolving today. She has conquered a wide range of techniques—from color field to encaustic wax— employing them to relentlessly explore the fissures between abstraction and figuration, figuration and landscape: a figurative painter with Abstract Expressionist roots, perhaps.

But also: a feminist who had no truck with conventional feminism—a post-feminist, perhaps, 50 years before the word was coined;

A painter of horses and sensual women rendered on complex fields of Hebraic text and Spanish Catholic icons intertwined;

A watercolorist reworking dried surfaces with emery cloth and sandpaper (she works from a small phalanx of paint bowls—the way Bill de Kooning showed her).

Prescient with respect to content, Joffe anticipated our current intellectual exploration of the Spanish Inquisition as a lens onto the Holocaust and modernity in general by twenty years, at least.

Art is ahistorical, Theodor Adorno reminds us. Like any figure who rejects a conventional pathway, Joffe and her work are deeply engrained in history and yet somehow outside of it. History is more or less bunk, says Henry Ford. The only history that is worth a tinker’s damn is the history that we make today.

Harriette Joffe is, in the end, an American artist of this new century and the last. Her touchstone was the East End of Long Island during the formative years of 20th-century American Art. Less introspective than the European-born First Generation Abstract Expressionists who she knew and worked with, her coming of age after World War II allowed her work an exuberance that betrays her New World roots. Beyond that fact, no one owns her.

After New York, she traveled extensively in the restless way of those born in the American Century: adventure under a beneficent Pax Americana. In New York she had rooted in and discovered iconoclasm and experimentation, performance and landscape. In Italy, France, and on the Iberian Peninsula she found the stubborn relevance of work done centuries ago. In New Mexico and other cultural colonies of Mexico’s El Norte she found landscape again; and, oddly, the still warm trail of Crypto-Judaism’s 15th-century European Diaspora: Magen David and Cross among the succulents. (It followed her back from Spain in her knapsack, that history, sticking in her paint brushes.)

More recently, she has discovered inspiration and renewal in the Massachusetts Berkshires, now following their downward flowing waters to the sea, back across the Sound to her Long Island upstart start. After 50 years of work, now in the second decade of the 21st century and the seventh decade of her life, she is still searching every day, making art with tools as old as Lascaux and ideas as fresh as her laptop.